The rooms are named after the places we have lived in and loved, in Bengal and Tamil Nadu. They all have fans, air-conditioners and en-suite bathrooms. They don’t have TVs or phones. Though either of those menaces can be easily rustled up for children or major sporting events.

There are two rooms in the Portuguese part of the house. KONNAGAR, the master bedroom has an old four-poster and its own balcony. The large bathroom next door has a shower and a cast iron bath tub saved from the Royal Bombay Yacht Club.

ALIPORE has a window seat that is either a love seat or prayer spot, overlooking the next door coconut plantation. So if you hear a small explosion overhead every now and then, it is more likely to be a coconut hitting the tiles than the Taliban. It has a simple teak antique double bed and a long, narrow ensuite bathroom hidden between the two houses.

In the older, Hindoo part of the house, MADRAS is a large twin room with generous single beds that can be attached together if you would prefer a double bed to twin singles. It has double doors leading out to the garden from its open-air bathroom. BALLYGUNGE, our smallest room has a lovely old teak queen-sized four-poster, with a distinctly Gujarati bathroom. OOTY, with its private entrance from the courtyard, has a built-in double bed and sitting area and a mirrored ensuite secret bathroom.

CHANPARA is a huge tent with a queen sized old four poster bed and some of our camp furniture including a Thunder Box and an early version of a mini-bar. It has a private entrance and young garden of its own, in a coconut plantation by the pool. It is fully plumbed and air-conditioned.

The CHUMMERY is a large, air-conditioned cottage with two verandas. Our latest addition, DARJEELING, is in the old garage where Simon lived for five years. It has a Mezanine floor for extra beds and its own private garden.

Vivenda sleeps sixteen in perfect comfort and more, in emergency. KONNAGAR, MADRAS,- The CHUMMERY, DARJEELING and CHANPARA are the four rooms with most space for extra beds or a cot. We are happy to arrange spill-overs at various price points, round and about. 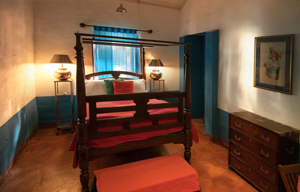 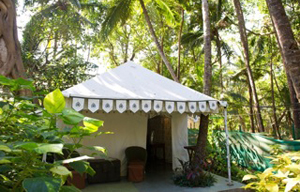 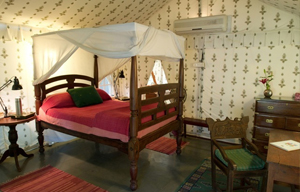 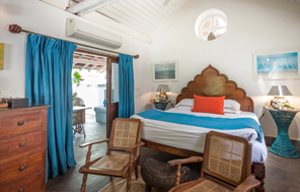 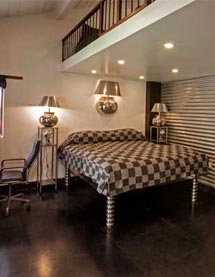